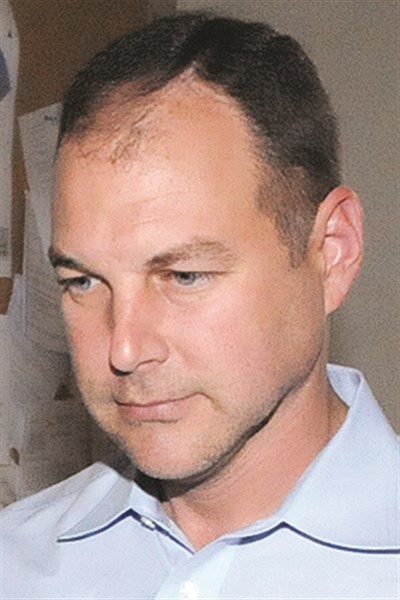 Former Fair Bluff Police Chief Marty Lewis was convicted on three of four felony charges against him Wednesday, sentenced to serve from 7.5 to nearly 10 years in prison for trafficking Oxycodone, sometimes in uniform and on duty.
Lewis was also fined $100,000.
Jurors found Lewis, 44, guilty of the sale and delivery of Oxycodone, possession with intent to sell and deliver the drug, and conspiracy to traffic in opiate compounds of more than 14 grams, less than 28 grams.
Lewis was acquitted of a single cocaine possession charge. SBI agents said they found the drug in Lewis’ home during his May 8, 2012 arrest.
Assistant District Attorney Heath Nance, one of the prosecutors on the case, credited the number of witnesses who testified against Lewis, and the work of the SBI in securing the conviction.
“The SBI did a good job with the case,” Nance said.

Witnesses
Those testifying against Lewis included admitted drug dealer James Scott and former town clerk Tamika Packer. Both said Lewis secured pain medication from Scott, and provided it to Packer, often in exchange for sexually suggestive texts, photographs, and acts from Packer.
Lewis testified that he was role-playing, part of his own investigation into the illegal drug trade. Though Lewis said the targets of his investigation included Scott, Packer, and a local pharmacist, he admitted that he never opened case files on anyone as part of that investigation.
Rita Capps, a former girlfriend, testified that Lewis told her of his investigation, and that she was aware of the sexually suggestive texts, many read into evidence during trial.
Former Fair Bluff police officer Ricky Soles testified about irregular activities at the department, and Lewis’ routine contact with drug dealers, and how he raised those concerns with SBI Agent Adrienne Harvey.
Harvey testified that Lewis admitted to all of the crimes for which he was charged during a two-hour interview following his arrest. She testified that the interview was not recorded, common practice the SBI following arrests.
Scott, one of the state’s key witnesses, was back in jail during the weekend, charged with cocaine possession in a Fair Bluff police investigation.
Lewis, once a promising police officer, was chief in Fair Bluff for six years. He previously served for the Tabor City Police Department and the Columbus County Sheriff’s Office.