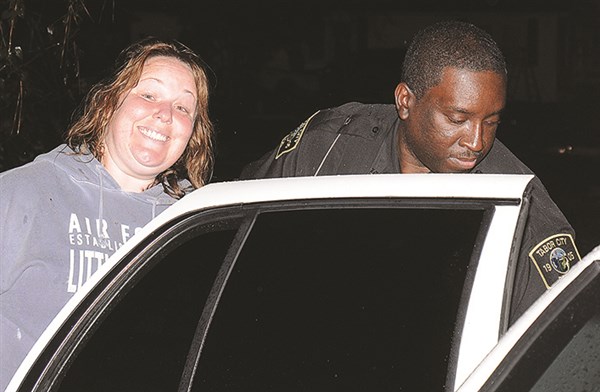 A stabbing on Jesse Street Monday evening ended with a Chadbourn man in the hospital, his girlfriend from Loris in handcuffs, Capt. Russell Conway of the Tabor City Police Department said.
Randy Perritte, 40, was stabbed in the chest during an altercation with Jennifer Ann Katzenberger, 32, just before 5:30 p.m., Conway said.
Katzenberger was charged with assault with a deadly weapon inflicting serious injury, Conway said. She was held at the Columbus County Detention Center without bond on the domestic violence charge.
Perritte was outside the home of a co-worker, the men had just come home from construction work, when Katzenberger arrived and began to argue with Perritte, Conway said.
Katzenberger cut Perritte with a small folding pocket knife, and “attempted to stab others, but did not make contact,” Conway said.
Perritte was taken by Tabor City Emergency Services ambulance to McLeod Loris hospital, and was talking to emergency workers when they left, Conway said.
For more on this story see Wednesday’s Tabor-Loris Tribune, on sale Tuesday, in print and online.