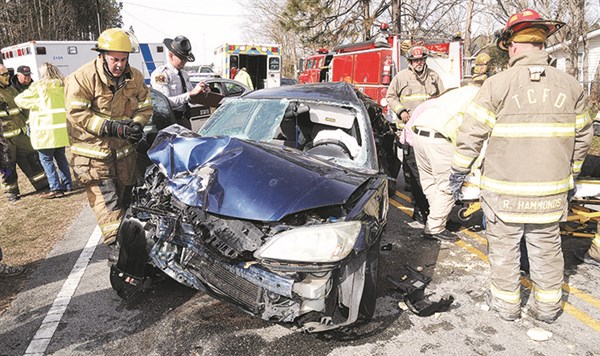 UPDATE: Noah Lee Nealey, the month-old infant critically hurt in a three-vehicle crash just east of Tabor City Friday afternoon, died of his injuries Saturday morning at McLeod Regional Medical Center in Florence.
He was a passenger in a four-door Honda car driven by his mother, Jana Helms Nealey, that slammed into the rear of a Waste Management garbage truck about 12:30 p.m. Friday on NC 904 near Cox Subdivision Road. CPR was performed at the crash scene for about 30 minutes before the first of five ambulances arrived on the scene.
Taken first to McLeod Loris hospital, Noah was airlifted to the Florence medical center later Friday afternoon.
Noah Nealey’s obituary may be found here.
For more on this story see Wednesday’s Tabor-Loris Tribune in print and online.

Friday afternoon post
A one-month-old baby was critically hurt in a three-vehicle crash that began as a four-door Honda slammed into the rear of a Waste Management garbage truck just east of Tabor City Friday afternoon.
Five people were taken by ambulance to McLeod Loris hospital following the 12:30 p.m. crash on NC 904 near Cox Subdivision Road. Only the infant, who had been in a rear-facing car seat behind the driver of the Honda, appeared to have life threatening injuries, though his mother was pinned in the vehicle until firefighters were able to extricate her using the Jaws of Life.
Stabilized at McLeod Loris, the infant was reportedly being prepared to be taken by helicopter to McLeod Regional Medical Center in Florence Friday afternoon.
A second child in a car seat in the rear, passenger section of the Honda, the driver of a second car, and the driver of the garbage truck were also taken to McLeod Loris.
A helicopter was requested at the crash scene, but was not available.
For more on this story see next Wednesday’s Tabor-Loris Tribune in print and online