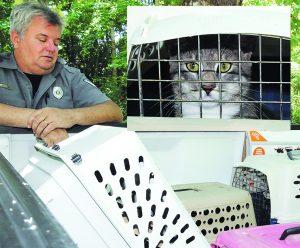 A captured cat peers from a kennel in the back of Animal Control Director Joey Prince’s truck. (Photo illustration, Deuce Niven, TLT)

Vernadine Quest said she contacted Animal Control because she was being forced to move from the home, and that no one would be left to feed the feral cats.

“Bye, baby,” Quest said, peering into the back of Prince’ truck, with pens containing several cats he had collected on his second trip of the day, gathering more than 20 on his first visit.

Prince said Quest had been feeding the cats, which had grown in number over time, but had provided no other veterinary care. None of the cats had been spayed or neutered, Prince said.

Many of the cats, mostly the younger ones, have upper respiratory infections, Prince said. Cats are of all ages and colors.

“This many cats coming into a shelter that was already full this morning will result in a strain on shelter resources” Prince said. “One Tabor City resident has already made a donation of dry cat food, but the shelter is now in desperate need of kitten food, wet cat food and clay cat litter.

“Anyone wishing to adopt or rescue the kittens and cats is asked to please help.”