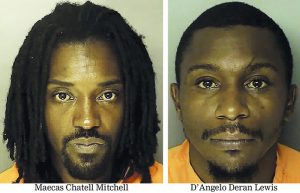 Efforts by the U.S. Marshal’s Service Fugitive Task Force have put the last two of four suspects in a May 3 gun battle that injured three behind bars, Capt. Greg Sibbett of the Tabor City Police Department said Tuesday.