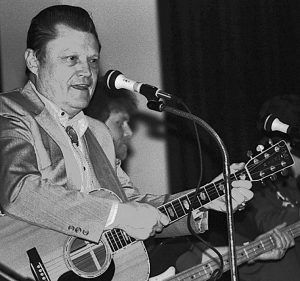 Those unfamiliar with the Grand Ole Opry star whose 1959 hit “Waterloo” became his signature song, and who drive through Tabor City, will soon be getting a reminder.

New “Welcome to Tabor City” signs got a tentative nod from Town Council earlier this month, with strong support to include the words “Birthplace of Country Music Legend Stonewall Jackson” prominently.

Jackson, now 84 and living in Brentwood, Tennessee, is happy for the recognition, though health issues will likely prevent him from returning to the place he was born, town Promotions Director Dianne N. Ward told council members.

“He has given permission for the signs,” Ward said. “He’s delighted that we are doing this. He was honored. He wished he could be here for the unveiling.” 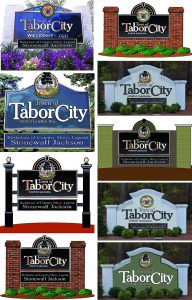 Signs will be placed in two locations on U.S. 701, at East Tabor where a welcome sign used to stand, and at the Time Saver convenience store just across the state line.

Council first has to decide on a design for the sign. Ward presented nine options to council earlier this month, with a decision on one possible in July. All nine options, accompany this story .

Jackson had been away from Tabor City for three decades when he returned to perform two concerts at the 1990 North Carolina Yam Festival.

His Saturday night performances brought nearly 600 people to the Beth R. Woody Auditorium on what was then the Tabor City Primary/High School campus. Earlier in the day Jackson had served as Grand Marshal for a chilly Yam Festival Parade.

“Stonewall Jackson became a member of the Grand Ole Opry about as fast as anyone ever did,” his biography at opry.com says. “It took him about 24 hours.”

That was just the beginning of a long list of firsts for the artist, whose first hit, “Life to Go,” was a George Jones composition released in 1958. His follow-up single, “Waterloo,” would become his signature song.

For more on this story see today’s Tabor-Loris Tribune in print or online.