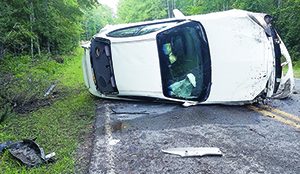 A good deed on a wreck scene was quickly punished with a carjacking at gunpoint this week, an Horry County Police Department report said.

No one was injured, and the good Samaritan forced to drive two men from the single-car crash on Hwy 348 east of Loris lost only his cell phone, no doubt gaining some shattered nerves in the process.

Police were dispatched to the carjacking victim at a home on SC 905 in the Longs area about 4:50 p.m. Tuesday, the HCPD report by Officer Jonathan Baker said.

There a 46 year-old Loris man described driving up on the overturned car on Hwy 348 in the Goretown area about a half-hour earlier, finding “a large black male standing outside of the vehicle, a skinny black male attempting to exit the vehicle,” the HCPD report said.

As the local man got out of his vehicle, the larger man “produced a black semi-automatic handgun,” and at gunpoint ordered the man back into his car. 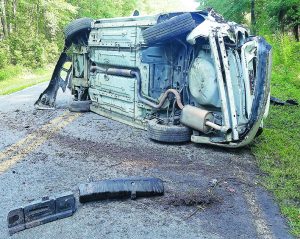 The skinny man, bleeding heavily and apparently seriously injured, was able to free himself from the car, pulled a “large duffel bag” out, and got into the front passenger seat of the victim’s vehicle.

Ordered to drive the victim took the pair east on Hwy 9 to Little River, eventually pulling into an Anderson Brother’s Bank branch there. During the ride, the larger of the men used the victim’s cell phone, though the victim said he did not know what was said during the phone call.

Both men left the victim, in his vehicle, in the bank parking lot, leaving on foot with the duffel bag and the victim’s cell phone. The victim told police he then drove to the nearest home where he knew someone and called 911.

There is no new information on the case, HCPD spokeswoman Krystal Dotson said Friday.

Look for updates here as events warrant, and more on this story in the next Tabor-Loris Tribune in print and online.