With the win the squad from Columbus County will play Tennessee at 8:30 p.m. EDST Tuesday, continuing their quest for a World Series title. North Carolina is the only undefeated team left in the series.

Dixie Angels from South Columbus will be playing in their World Series Tuesday, too. See the story below.

Look for updates here, as events warrant, and a wrap-up in Wednesday’s Tabor-Loris Tribune in print and online.

A third round 8-6 win eliminating Mississippi from the Dixie Angels X-Play World Series in Sumter Monday night sets up the North Carolina champions from South Columbus to continue their quest for a national title at 8 p.m. Tuesday in Sumter, taking on either the South Carolina champions of host Sumter. 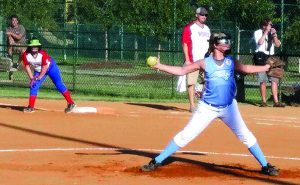 Dixie Debs will be playing Louisiana in that state starting at 8:30 p.m. EDST tonight.

Look for updates here, as events warrant, and a wrap-up in Wednesday’s Tabor-Loris Tribune in print and online. 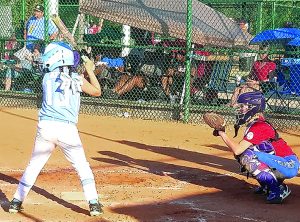 Hannah Nobles at bat in Sumter

South Columbus Dixie Angels X-Play takes on Mississippi at 6 p.m. in Sumter, a must win for the NC girls who fell in the opening round, a rare defeat in post season play. Columbus County Dixie Debs, undefeated in the series, are up at 8:30 p.m. EDST, playing Louisiana on their home turf.

South Carolina proved no match for the North Carolina Dixie Debs Sunday night, with the Columbus County girls claiming a 9-1 win. Lindsey Jones scored in top of the second with a fielders choice hit by Kelsey Carroll. Morgan Nye singled and Hailey Sarvis and Alex Chestnutt doubled in the top of the 4th to make the score 3-1 NC.

Hailey Sarvis doubled and Alex Chestnutt hit home run, in the top of the 7th to give the NC squad a 5-1 lead. Lindsey Jones and Kelsey Carroll were good for singles, Alexis Suggs for a walk.

A double from Lauren Smith scored two more, followed with runs by Kelsey Carroll and Lauren Smith for the final margin of victory.

Check back here for updates from tonight’s games, and see Wednesday’s Tabor-Loris Tribune for a recap of both series.