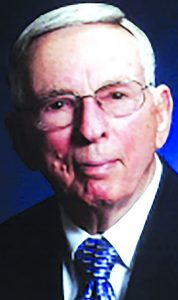 George O. “Buddy” Fowler of Loris, an Horry County Police Department pioneer and former chief of the agency, died Thursday in Rock Hill. He was 92.

Fowler was one of the eight original officers of the HCPD when it was formed by an act of the South Carolina legislature in 1959, serving under Chief Henry Hardwick, who served briefly before retirement, succeeded by Chief Lee Johnson.

Fowler rose through the ranks steadily serving as Chief of Police for a time, retiring as Captain of Detectives in 1991.

Officer “Buddy” Fowler and the entire HCPD in 1975. (HCPD photo)

Family planned to receive friends from 4 to 7 p.m. Friday, Sept. 1, at Hardwick Funeral Home in Loris.