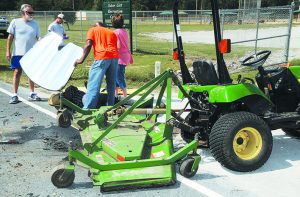 A man on a small tractor and mower was injured when an SUV drove into the back of the equipment on Complex Street Friday afternoon.

Good Samaritan’s who came upon the crash scene pulled the John Deere equipment off of the man, and provided shade from the afternoon sun as emergency crews responded.

An AirLink Helicopter from Whiteville responded and transferred the man, described by witnesses as a 67 year-old from Horry County, to New Hanover Regional Medical Center in Wilmington. 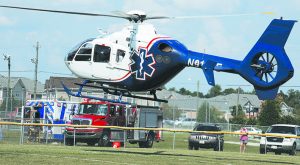 Police Chief Donald Dowless said the SUV driver, a 65 year-old woman from Green Sea, was taken by ambulance to McLeod Loris hospital. She did not appear to have serious injuries.