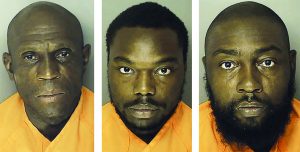 Heroin, cocaine and crack cocaine purchased during a two-month investigation that centered on the Cedar Branch Community has resulted the arrests of three Loris men and seizures of drugs, guns and money, the Horry County Police Department reported Tuesday.

Those arrested Monday and the charges they face are:

All three remained at the J. Reuben Long Detention Center near Conway on Tuesday, held without bond.