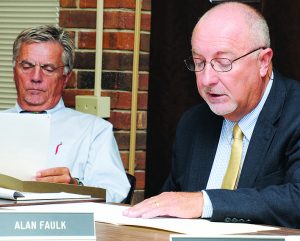 School board member Worley Edwards looks over a consolidation resolution as Superintendent Alan Faulk reads it into the minutes at Monday’s Board of Education meeting. (Deuce Niven, TLT)

In less than five minutes, with no discussion, a significant step towards the consolidation of Columbus County’s two public school systems was made by the Columbus County Board of Education Monday morning.

Board member Junior Dew made the motion to adopt the “Resolution Regarding the Consolidation of Columbus County and Whiteville City Schools” with Randy Coleman offering a quick second ahead of the unanimous vote.

Changing times forced the issue, Superintendent Alan Faulk said. Leaders in both school systems have resisted calls for consolidation for decades. A pressing need for new school facilities has been complicated by the two systems and rules that require equal per-student funding for the systems.

Whiteville City Board of Education members were expected to discuss consolidation during a Monday night meeting. Its members, and Supt. Ken Garland, have previously argued against consolidation, saying that merging the systems would result in millions of dollars less to the county overall for teaching and support operations.