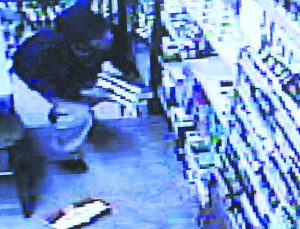 It took about an hour to force entry into Sidney Service Mart in the early morning Thursday, a man who apparently had at least one accomplice taking dozens of cigarette cartons worth thousands of dollars for his effort.

Deputies responding to the 2:29 a.m. call at the convenience store on James B. White Hwy South at Peacock Road found a 2 by 2 foot hole in a concrete wall on the store’s south side, and an estimated 85 cartons of cigarettes worth some $3,400 missing inside, a report by Deputy Samantha Hickman said.

Store surveillance video captured the thief working to get inside the store for about an hour, with evidence showing attempts to gain entry through a small window on the building’s north side, and through an air conditioner connection on the back side of the business, store clerk Marjorie Kelley said. 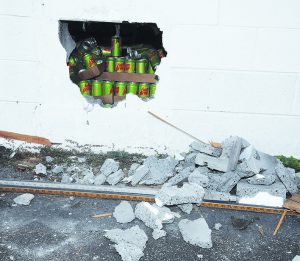 Before his last effort to get inside, the man is seen on video walking towards the south side of the building with what appears to be a metal pipe in his hands.

Video also shows a white four-door car repeatedly driving past the front of the store, pulling in the parking lot occasionally, the apparent accomplice never getting out.

Inside the store, later Thursday morning, several men sat near the still-open hole in the wall, drinking coffee and discussing the break-in. Repairing the hole in the block wall will cost about $500, the sheriff’s report estimated.

Look for updates on this story in the next Tabor-Loris Tribune in print and online.