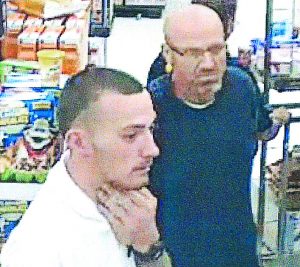 A father and son from Tabor City are wanted by police in Whiteville for thefts taking place at two retail stores there.

Orain Patrick Caines, 45, and Christopher Paul Caines, 24, are charged in Whiteville warrants with two counts each of larceny, one from each Wal Mart and Tractor Supply, city spokesman Hal Lowder said Tuesday.

Police in Whiteville are asking for help from the public in locating larceny suspects from their local Wal Mart and Tractor Supply stores.

Surveillance video of the men released Monday shows them in the Whiteville stores. WPD spokesman Hal Lowder said the men may be in a white Cadillac with a South Carolina license plate.

Anyone who recognizes either man is asked to contact Det. Scott Moody or Det. Amy Corder at the Whiteville Police Department, 910-642-5111.

Look for details on this story, as they become available, in the next Tabor-Loris Tribune in print and online.