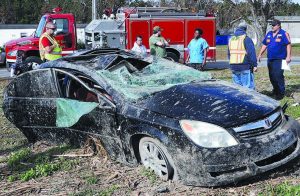 Ambulances from Tabor City Emergency Services and Nakina Fire/Rescue took a small child and two women to McLeod Loris hospital following the 10 a.m. wreck about a mile south of NC 904.

Three other people who were in the four-door Saturn car were uninjured, Tabor City Fire Chief Jerry Hodges said.

Damage to the car was extensive, its right rear tire left in the field near where the car came to rest on its other wheels. Everyone was out of the car when fire and EMS crews arrived. Firefighters offered aid to the injured in front of a home across the road until EMS crews arrived.

An investigation was underway by the North Carolina Highway Patrol.

Look for details in the next Tabor-Loris Tribune in print and online.