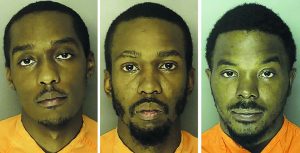 Two men are in custody, a third is being sought in a series of four Loris and Longs area home invasions that spanned seven weeks, from Nov. 11 through Dec. 28.

Warrants charge all three with four counts each of armed robbery, kidnapping, possession of a weapon during a violent crime, and burglary.

Bellamy was arrested Dec. 29, Faison on Dec. 30, and both are being held without bail at the J. Reuben Long Detention Center near Conway, jail records show.

Ford was last seen in the Freemont area of Horry County, Dotson said, and should be considered armed and dangerous. Anyone with information on his location is asked to contact the HCPD at 843-915-8477 or CrimeTips@HorryCounty.org.