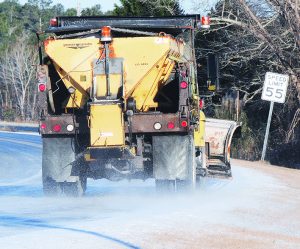 A NC DOT truck spreads salt during the winter storm nearly two weeks ago. Local impacts from tonight’s weather are not expected to be as severe, the National Weather Service reports. (Deuce Niven, TLT)

Horry County Schools will operate on its regular schedule today.

Columbus County District Court will begin at 11 a.m., Superior Court will operate on its regular schedule.

While ice and snowfall accumulation probabilities continue to appear light in the Tabor-Loris Community and surrounding areas tonight, frigid temperatures that could lead to black ice on roadways is prompting some schedule delays.

Columbus County Schools will be on a two-hour delay Thursday for students and staff as a result, the district announced Wednesday afternoon. Exams will continue as scheduled.

Updates will be posted here as events warrant. Look for a story on the winter weather and its impact on the Tabor-Loris Community in the next Tabor-Loris Tribune in print and online.