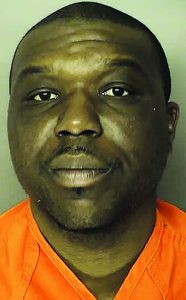 A drug trafficking investigation dating back to at least October landed a Loris man in jail Wednesday morning, charged with two counts of trafficking in meth or cocaine base.

More than $46,000 was seized as part of the investigation, Horry County Police Department spokeswoman Krystal Dotson said in a news release.

Ernest Lashawn Jordan, 36, of Church Street in Loris was booked into the J. Reuben Long Detention Center near Conway after 9 a.m. Wednesday, with warrants obtained following a search of his home Monday, Dotson said.

Investigators have seized $46,180 in cash, two long guns, a pistol, and 339 grams of marijuana, Dotson said.