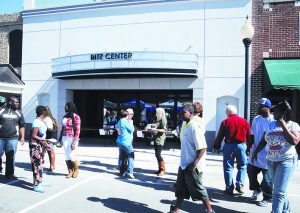 Tabor City’s Ritz Center and the N.C. Yam Festival, in this 2014 image, two quality of life positives for the town. (Deuce Niven, TLT)

Tabor City’s growth is in stark contrast to an overall decline in population for Columbus County, dropping 2.11 percent in the same six-year span. Population fell in every municipality in the county except four, Bolton, Brunswick, Sandyfield and Tabor City. Growth in those towns was more modest, from .29 percent in Bolton to 2.91 percent in Sandyfield.

Population growth should continue in Tabor City, with one new apartment complex just off of Swampfox Hwy East expected to open later this year, another one being considered elsewhere in the town.

Leonard said he and the town staff have worked to improve housing availability in the town, and to make Tabor City an attractive place to live.

“We keep on doing the best we can,” Leonard said.