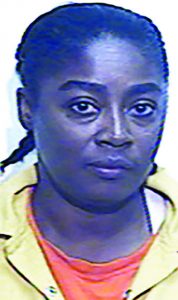 Drug possession inside a prison charges were leveled against a Greensboro woman accused of concealing contraband inside her body at Tabor Correctional Institution.

Gladys Mae Davis, 46, was arrested after a tip led officers to her Saturday, Capt. Greg Sibbett of the Tabor City Police Department said.

Police recovered 30 grams of K2 spice, a synthetic cannabinoid, that were inside a balloon with a string concealed in Davis’ body, Sibbett said.

Both Davis and the inmate she was visiting are targets in an ongoing criminal investigation, Sibbett said. Davis was held at the Columbus County Detention Center in Whiteville under a $5,000 bond.

Look for updates on this story as they become available in the next Tabor-Loris Tribune in print and online.