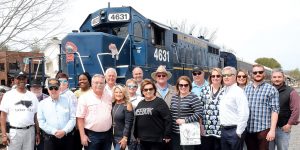 Could Tabor City be America’s next tourist train destination, tapping into millions of Grand Strand tourists via a hub on Conway’s scenic riverfront?

That’s the vision leaders in Tabor City have been exploring for two years, one that has captured the attention of others in Conway, earned federal funding for a feasibility study that should be complete within days, and prompted a fact-finding expedition to western North Carolina, northeastern Georgia and southeastern Tennessee during the weekend.

A total of 20 delegates, elected and appointed leaders, a reporter and some spouses heard from leaders in Dillsboro in Western North Carolina, Blue Ridge and McCaysville in Georgia, and Copper Hill, Tennessee about their respective experiences with tourist railroads.

They all said tapping the formally freight oriented rail lines for passenger tourism excursions had reaped positive rewards, revived struggling or dormant economies, and presented a variety of opportunities and challenges, parking the most often mentioned.

Capping the list of presenters was Robert Franzen, President of Sylva based Steam Services of America, who said he would like to realize his long-held dream of operating a tourism based railway in Conway, with regular excursions to Tabor City coupled with shorter, specialty events including dinner theaters, a Polar Express at Christmas, and more.

“I think I’m the right candidate to help pull this thing off,” Franzen told the Tabor City and Conway delegates Sunday morning.

Nothing will happen immediately, Tabor City Town Manager Al Leonard said. R.J. Corman Railroad, owners of the track and operator of a freight service on it, is investing millions of dollars in track improvements that are now underway, including nearly $10 million awarded through the federal government’s TIGER program.

That work has begun where the Corman line connects to the national CSX system in Marion County, and will work its way along the track through Nichols, Fair Bluff, Chadbourn, Tabor City, then heading back into South Carolina and ending in Conway.

That project is expected to take two years, important time if this dream is to become reality, Leonard said.

R.J. Corman leaders are aware of the planning, but have not given formal approval, Leonard said. That’s just the tip of the legal, logistical and infrastructure hurdles that lie ahead.

“What R.J. Corman has told us is that they would allow the study, keep an open mind, and they will review it and give it every chance to speak to its own merits,” Leonard said.

For additional details, stories and photos, see today’s  in print and online.