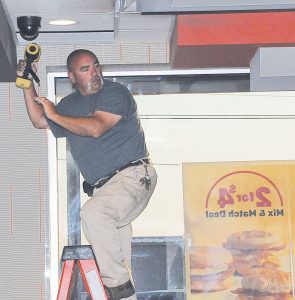 UPDATE: A heating unit on the roof of the McDonald’s in Tabor City was the apparent source of a smoke odor that closed the business about 7 a.m. Monday, Tabor City Fire Chief Jerry Hodges said. “They opened up just a minute ago,” Hodges said shortly after 7:30 a.m.

An odor of smoke, described by first responding Tabor City Fire Department members as apparently electrical, forced a temporary closing of McDonald’s in Tabor City at about 7 a.m. Monday. Assistant Fire Chief Jeff Fowler, with a thermal imaging camera, climbed a ladder in search of the source. Look for updates here as events warrant, a wrap-up in the next Tabor-Loris Tribune in print and online. (Deuce Niven, TLT)