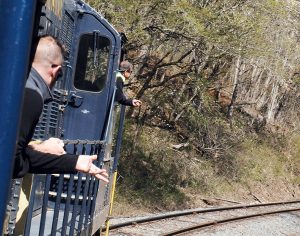 There is a more than sufficient market for a tourism railroad in Tabor City, apparent access to the rail system owned by R.J. Corman Railroad for just a few years, logistics that would seem to prevent a tourism rail line with a hub in Myrtle Beach, the study concludes.

Its conclusions could not have been more positive as Tabor City and Conway jointly explore a railroad tourism relationship that could, in part, include tourists excursions drawing from the Grand Strand market for day-trips to Tabor City as it evolves into a tourist destination.

Critical to that process is improving rail speed, something R.J. Corman is doing with the help of major federal grants. It’s a two-year effort that will give Tabor City and Conway time to prepare, the study concludes.

Tabor City leaders have been actively, and quietly exploring rail tourism possibilities for two years, an effort that saw light with a weekend excursion to western North Carolina, northeastern Georgia and southern Tennessee to see how rail tourism has worked for several communities.

Leaders involved in that April 20-22 trip said they came away cautiously optimistic that rail tourism could work for Tabor City and Conway.