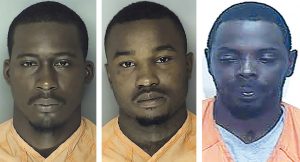 Three Columbus County men have entered guilty pleas federal robbery and weapons charges that tie them to the killing of a Loris store owner and a separate armed robbery of a U.S. Post Office in Clarendon.

Those pleas do not include murder, a crime two of the three men initially faced.

Vanderhorst was additionally charged with discharging a firearm in furtherance of a crime of violence and being a felon in possession of ammunition.

Sentencing dates have not been set.

Their guilty pleas established for the first time, publicly, that Miller, Altman and Vanderhorst were involved in the May 3, 2016 armed robbery at the U.S. Post Office in Clarendon.

Miller and Vanderhorst were in custody about four hours after the May 16, 2016 robbery at Loris Market and Beverage and the killing of store owner Edy Boudagh, who was 45.

Miller and Vanderhorst were originally charged with murder, assault and battery, armed robbery, and possession of a weapon while in the commission of a violent crime that could result in a sentence of life in prison or death.

Altman was arrested later, accused as an accomplice, conspiring with Miller and Vanderhorst and driving them to the store in Loris.

Evidence presented at the guilty plea hearings established that Altman drove Miller and Vanderhorst to the Post Office in Clarendon, waited in the vehicle as the other two entered. Vanderhorst, with a gun, jumped a counter and struck the postal clerk, who was alone in the office, took her cell phone and $284 in cash, the news release said.

Altman was again at the wheel, and waiting outside during the robbery of the Loris store 13 days later. Boudagh and his wife were in the store, the news release said. After entering, Vanderhorst shot at Mrs. Boudagh, missing her, then approached the counter and fired a shot into the ceiling.

Mr. Boudagh “took the money out of the register and passed to Vanderhorst who took the money and handed it to Miller,” The news release said. “Vanderhorst then turned and fired two shots, striking and ultimately killing the store owner.”

All three men face prison terms, Vanderhorst could get life in prison, with a minimum of 10 years, plus a $250,000 fine and at least three years of supervised release.

Miller and Altman are subject to maximum prison terms of 40 years for each of the crimes, plus fines of $250,000 and up to three years of supervised release.