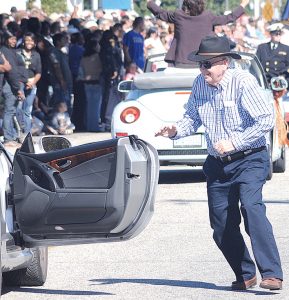 Jimmy Woodard Garrell, a Tabor City business leader known and beloved as JimmyG, the face of the TimeSaver and Cash & Dash convienience store chain, passed away Sunday June 10, at Grand Strand Regional Medical Center in Myrtle Beach. He was 82.

“He’s going to be sorely missed in our community, and in the Tabor City Committee of 100,” current committee chair and Columbus County Commissioner Trent Burroughs said Monday.

Garrell was a founding member of the Tabor City Committee of 100 and served as its chairman for decades, ending in 2016 when he passed the gavel to Burroughs.

“He brought a lot of business expertise and organization to the committee,” Burroughs said.

A son of the late B. Alton and Doris Woodard Garrell, and husband of the former Martha Jo Hayes of Green Sea, Garrell grew up in Tabor City, was a graduate of the University of North Carolina at Chapel Hill, and was among its most devoted alums.

His love for UNC came early, with his neighbor the late H.G. “Doc” Dameron taking him to UNC football games in his youth. He was a member of the UNC Educational Foundation for more than half a century, and with his wife established a scholarship in 1986 named the Tabor City Basketball Scholarship, a nod to his home town.

Garrell’s appreciation for athletics wasn’t just as a spectator. After graduating from Tabor City High School he en­rolled at Staunton Military Academy in Virginia where he played football before transferring to UNC and making the freshman team there, a dream fulfilled though he never made it to the varsity squad.

He was named a Carolina Living Legend by UNC and in 2010 was recognized with the state’s highest civilian honor, the Order of the Long Leaf Pine.

For much more on the life and service of Jimmy Garrell see this week’s Tabor-Loris Tribune in print and online.