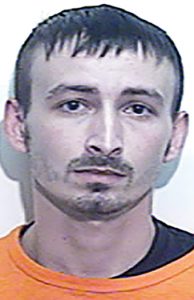 Felony warrants for soliciting a child by computer and disseminating obscene materials to a minor were served by state agents on a Cerro Gordo man Tuesday, Columbus County Detention Center records show.

Kelton Grant Ford, 28, of Bullard Lane, Cerro Gordo, was charged with two counts of soliciting a child by computer, two counts of disseminating obscene material to a minor younger than 16, and cyberstalking, on warrants obtained by Special Agent S.A. Bassett of the State Bureau of investigation.

Those crime took place between May 1 and July 31, the warrants said. Ford is accused of soliciting a girl younger than 16 to send photos and video of her touching herself sexually, sending a sexually explicit photo of a man to the girl, and of electronically communicating with the 13 year-old girl “for the purpose of annoying, harassing and embarrassing” her, the warrants said.

Ford was held at the Columbus County Detention Center in Whiteville, his bond set at $21,000.

Updates to this story will be posted as events warrant, with the full story in the next Tabor-Loris Tribune in print and online.