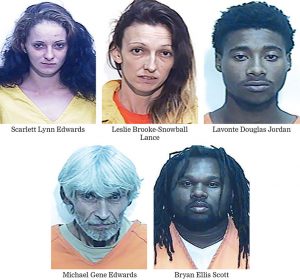 Two people were arrested in the Iron Hill investigation, with a third in custody on unrelated warrants. Two more were charged in the Beaverdam area case, separate news releases from the sheriff said.

Charged in the Iron Hill cases were Leslie Brooke-Snowball Lance, 28, and Lavonte Douglas Jordan, 23, of the same address on Reynolds Road, Tabor City.

Scarlett Lynn Edwards, 21, who had the same address as Lance and Jordan, was arrested on charged unrelated to the drug investigation.

Vice-Narcotics agents completed “multiple undercover purchases of illegal narcotics” at the home on Reynolds Road, a news release said, and as their investigation was winding down executed a search warrant on the house on Tuesday afternoon.

Detectives found “multiple” people inside the home “actively engaged in the use of illegal narcotics.”

Both Lance and Jordan were charged with felony counts of trafficking opium or heroin, possession with intent to sell and deliver amphetamines and marijuana, maintaining a dwelling to keep a controlled substance, and misdemeanor possession of drug paraphernalia.

Lance and Jordan were held at the Columbus County Detention Center in Whiteville, their bonds set at $25,000 each.

Scarlett Lynn Edwards was charged on five outstanding warrants, three for failure to appear in court, larceny and trespassing. Her bond was set at $1,750.

Those efforts began with the purchase of “small amounts of cocaine,” which led to “an elaborate network utilized to distribute large amounts of cocaine into both the Beaverdam and Chadbourn communities in Columbus County,” a news release said. “Multiple ounces of cocaine were purchased by undercover operatives from the two defendants.”

Detectives and SWAT Team members executed a search warrant at Michael Gene Edwards Wednesday, arrested him there, and later that day located Scott in Chadbourn and took him into custody.

Michael Gene Edwards was charged with 17 felony charges: six of trafficking cocaine; four of maintaining a dwelling to keep a controlled substance; three each of sale and delivery, and possession with intent to sell and deliver cocaine; and one count of cocaine possession.

Both men have previously been charged by the sheriff’s office for drug crimes, the news release said.