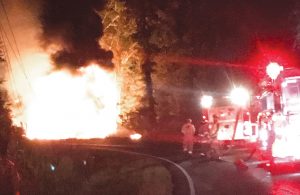 A section of NC 905 south of Nakina, closed following a gasoline tanker truck crash and fiery explosion Wednesday night, will not re-open until sometime Friday.

NC Department of Transportation Engineer Kenneth L. Clark, in a memo to the DOT’s Public Information office, said the environmental clean-up at the crash site would not be complete until sometime tomorrow.

“We plan to re-open as soon as we can tomorrow, but there is some pavement that, while structurally sound, will need to be milled out and replaced because of contamination,” Clark said.

Re-paving has been planned for next Thursday.

Settlemeyer was driving a fully loaded gasoline tanker truck, owned by Reliable Tank Line of Winston Salem, southbound on the twisting two-lane highway when he lost control of the vehicle, struck a ditch, then a power pole, overturning and bursting into flames, Gore said.

“We’ll never know,” what caused the crash, Gore said, because the fire that burned for about two hours consumed the truck. 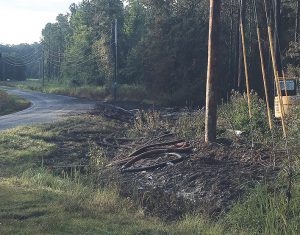 Charred earth at the scene of Wednesday’s deadly gasoline tanker crash near Nakina.

Capt. Greg Sibbett of the Tabor City Police Department was visiting a family member nearby when the truck passed, moments before the crash. He said the truck sounded as if it had a flat tire.

NC 905 remained closed Thursday morning, more than 12 hours after the crash. Sibbett said a strong odor of gasoline remained in the air. Gore said state Department of Transportation officials will be working to re-open the road, and that might require repaving a stretch of the highway.

Updates will be posted when available, the full story in the next Tabor-Loris Tribune in print and online.

Flames leaping high in the air, a fuel tanker consumed by fire that spread into nearby wooded areas was reported on NC 905 south of Nakina Wednesday evenings.

Emergency crews from a broad area of Columbus County responded to the 9:15 p.m. call, and near 11 p.m. it appeared there had been loss of life, further details not yet available.

Power lines were also reported down, complicating the initial response. Capt. Greg Sibbett of the Tabor City Police Department, who was in the area, said it appeared to be a single-vehicle crash, with no structures involved.

Witnesses reported a loud explosion and fireball early. Foam was used to help contain the fire, HERR, a local hazardous material company, had a clean-up crew on the scene before 11 p.m.

NC 905 was completely shut down, with the clean-up effort and North Carolina Highway Patrol investigation expected to keep the highway closed for an extended period during the night, at least.

Brunswick Electric crews cut electricity to a broad area as a result of the crash, with power out from John Gore Road to Gore’s Chapel Road. The crash took place in an “S-Curve” near John Gore Road.

Updates will be posted when available, the full story in the next Tabor-Loris Tribune in print and online.