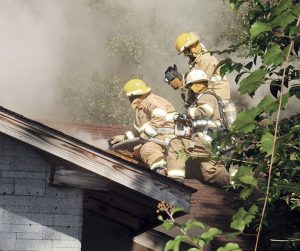 Firefighters flood the attic of a home in the Sidney community Friday afternoon while using a thermal imaging camera to look for hot spots. (Deuce Niven, TLT)

Fire heavily damaged the home of Jerry and Shirley Cribb in the Sidney Community Friday afternoon.

Williams Township Firefighters arriving at the home on James B. White Hwy South just north of Peacock Road found smoke pouring from the eves of the old, single-story wooden structure.

Jerry Cribb said he and his wife were home, but did not know how the fire began. They were able to escape uninjured.

“I can tell you one thing,” Jerry Cribb said. “There wasn’t one-cent of insurance on it.”

Firefighters from Brunswick, Nakina and Tabor City answered the call, with aid from an ambulance crew from Tabor City Emergency Services. There were no injuries

An investigation by the Columbus County Fire Marshal’s office was underway Friday evening.