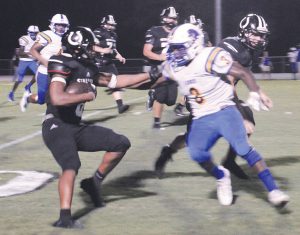 South Columbus cruised to a lopsided 41-14 victory over Loris in the 27th Border Battle rivalry match Friday, hosted by the Stallions.

Trequan Bellamy was again a playmaker for the Stallions as the Lions struggled to get on the scoreboard, succeeding twice, once in both the third and fourth quarters.

Look for more on both games in the next Tabor-Loris Tribune, in print and online.