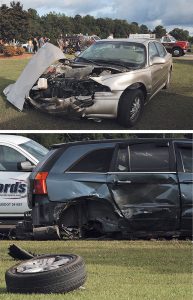 Ambulances from Tabor City and Chadbourn took several people to McLeod Loris and Columbus Regional Healthcare hospitals following a 5:30 p.m. wreck on Peacock Road at Old Cribbtown Road between the two communities. None of the injuries appeared serious, though the impact was hard enough to separate a rear wheel from a SUV. Look for the week’s news in the next Tabor-Loris Tribune in print and online. (Deuce Niven, TLT)