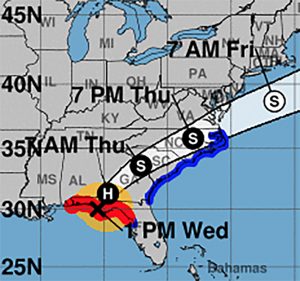 Winds from the former Hurricane Michael, passing a bit farther west of the Tabor-Loris Community than initially forecast, brought some trees down causing some power outages but otherwise largely spared this region while causing misery elsewhere in the Carolinas Thursday.

“When we made that decision it looked like it was barreling right at us,” Stephens said. “It ended up going more to the west, but we were trying to look out for the public and our employees when we made the decision.”

Shelters that opened at West Columbus High School and Edgewood Elementary in Whiteville Thursday morning were closed by 3:30 p.m. Columbus County’s Emergency Operations Center was also shut down by 3:30 p.m.

Elevated gusty winds were expected well into Thursday evening, with no substantial impacts expected. Rainfall amounts in the area were low, and did not result in any reported flooding issues.

A State of Emergency has been declared in Columbus County as Hurricane Michael moves towards the region from Florida, with two American Red Cross Shelters set to open Thursday morning, a Columbus County Emergency Services news release says.

Shelters will open at 8 a.m. Thursday at West Columbus High School in Cerro Gordo and Edgewood Elementary School in Whiteville, the later the county’s designated pet friendly shelter, open only to domestic animals and people.

Making landfall Wednesday in Florida as a Category 4 hurricane, Michael had recorded wind speeds of 155 miles per hour, the strongest storm ever recorded in that state’s panhandle.

Columbus County’s State of Emergency was declared effective 9:30 a.m. Wednesday, with the county expected to experience tropical storm force winds beginning about noon Thursday and ending about midnight. Rainfall is expected to last from 24 to 36 hours, landing on ground already saturated from Hurricane Florence and flooding that followed last month.

A threat of isolated tornadoes in will begin early Thursday morning and continue late into the night, the news release said.

Columbus County, Whiteville City and Horry County schools will all be closed Thursday, with decisions on Friday pending evaluations after the storm passes. Columbus County Schools have tentatively planned to resume classes at 10 a.m. Friday.

Columbus County government offices will be closed Thursday and Friday.

Columbus County’s Emergency Operations Center will be active during the storm, with two public access lines established. Citizens should use these lines to report downed trees and power lines, flooding, for questions concerning shelters, or to request transportation to a shelter.

Citizens should NOT call 911 except in the case of an emergency, including if someone’s life is in danger.

Horry County School District schools and offices will be closed Thursday as Hurricane Michael makes its way towards the Carolinas, a school district news release said.

Columbus County and Whiteville City schools announced plans to close Thursday earlier in the day, with the anticipation of schools opening at 10 a.m. Friday.

Threats from Michael “include the threat of tornadic activity, that would produce falling limbs, power outages, and conditions that could impact safe buss operations,” the news release said. “All afterschool activities, including sporting events, and extended day programs will be cancelled.”

With forecasts that Michael will “move through the area very quickly,” the school district plans to resume normal operations Friday, with the possibility of changing that plan as events warrant no later than 5 a.m. Friday.

Notification of any change will be made by a ParentLink email, the school districts website and social media pages, and through the HCS mobile app.

A potential make-up day for this even till be made after the second semester begins on Jan. 26, 2019.

Updates will be posted here as events warrant. Look for a storm recap in the next Tabor-Loris Tribune in print and online.

Officials with the Horry County Schools are monitoring the storm, and have not made an announcement regarding school for the rest of this week.

Updates will be posted here as events warrant. Look for a storm recap in the next Tabor-Loris Tribune in print and online.

Less than a month since Hurricane Florence made her sluggish, damaging trek through the region, another named storm is taking aim, likely with less severe but potentially very real impacts beginning Wednesday.

Hurricane Michael was expected to make landfall along the Florida panhandle this morning, then move briskly to the northeast, possibly still a tropical storm when he sweeps through the Carolinas on Thursday, bringing unneeded rainfall, wind, and the potential for tornadoes primarily during daylight hours, the National Weather Service was forecasting Tuesday.

Leaders in school districts in Columbus and Horry counties, already dealing with a record number of loss days because of Hurricane Florence and flooding that followed, were keeping a wary eye on Michael and the potential for disruption.

Horry County Schools leaders are also monitoring the storm and its potential impact, with no decision Tuesday on potential schedule impacts. Makeup days for those lost as a result of Florence were just approved by the Horry County Board of Education Monday. (See related story in this week’s Tabor-Loris Tribune in print and online.)

“Key Points” for inland areas in advance of Michael, NWS meteorologist Steven Pfaff said in a briefing Tuesday morning, include:

Look for more on this story here as events warrant, full stories in this week and next week’s Tabor-Loris Tribune in print and online.