Conner, 38, was killed in the line of duty during what seemed to be a routine traffic stop for speeding on U.S. 701 in the Sellerstown Community just after midnight Wednesday.

His alleged killer was in custody within hours, following a vehicle and foot pursuit in Fair Bluff.

For a family, both personal and professional, and a larger community in grieving, Sunday’s focus was to pay tribute to the 11 year North Carolina State Highway Patrol veteran, a son, husband, and father of two.

Conner’s casket encased body left Inman Ward Funeral Home at 11:45 a.m. in a procession led by a NCHP motorcycle squad and just a few marked patrol cars, headed for the high school where hundreds of officers from North Carolina and across the country awaited their arrival. 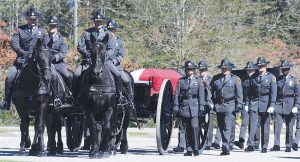 Patrol cars from as far away as Texas were seen in the area, and F/Sgt. Michael Baker, a NCHP spokesman, said he had been told a representative from the Alaska Highway Patrol was present.

From the hearse, out of sight of the public, the casket was moved to a horse-drawn caisson provided by the North Carolina Highway Patrol Troopers Association.

Master Trooper Conner was delivered to the front of the high school in a procession led by a bagpiper from the Georgia State Patrol, then the casket on board the caisson, surrounded by an NCHP Honor Guard.

(Note, an earlier version of this story said the bagpiper was from the North Carolina State Highway Patrol. That agency does not have a bagpiper.)

Following the caisson was a single, riderless horse.

A brief mock-graveside service is to be held outside the school following the service, with only family, close friends, and NCHP Troopers from Troop B, Columbus and Bladen, in attendance, F/Sgt. Baker said.

Look for more on the service, and this story, in the next Tabor-Loris Tribune in print and online.