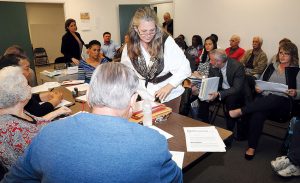 Jody Greene has won the race for Columbus County Sheriff, mixed beverage alcohol sales in restaurants and other businesses in Tabor City have passed, the Columbus County Board of Elections ruled during the formal canvas of the votes Friday evening.

Greene the Republican challenger for Sheriff, claimed a 43-vote victory over incumbent Democrat Lewis Hatcher, 9,395 to 9,352.

Liquor by the drink in Tabor City was approved by 11, 400 to 389, the canvas total showed. It appeared that the margin of victory was big enough to prevent a request for a recount.

A recount in the sheriff’s race seems likely, Hatcher Friday evening saying he would file a request for a recount by the 5 p.m. deadline Monday.

There were also questions about the number of absentee ballots included in the canvass, that did not appear to include absentee ballots by mail approved earlier in the day. With those votes, Greene would still have one, but by 31 votes, not 43, Columbus County Democratic Party Chairman Franklin Thurman said.

Boyd Worley, an attorney representing Greene, agreed there was a discrepancy but that the outcome would not change.

Thurman said the party does not expect to change the outcome, but will protest the election because of problems like the improper count of absentee ballots, and votes delivered late to the polling site in Tabor City on election day.

Look for a wrap-up of the election results in next week’s Tabor-Loris Tribune in print and online.

Another issue with Columbus County’s general election forced the Board of Elections Friday afternoon to re-open consideration of nine absentee ballots they had previously rejected as elections supervisor Carla Strickland was taken by ambulance to a hospital.

Board Chairman Harold Fipps said Strickland had “been under a lot of pressure,” and offered a prayer for her quick recovery just after the board recessed until 5 p.m.

Strickland has the agenda for the board’s canvas of the Nov. 6 general election, Fipps said. It was not clear if that process would be completed Friday.

Nine absentee ballots cast by residents of Liberty Commons in Whiteville were issued in error after the Oct. 30 deadline, and delivered in error to the West Whiteville precinct instead of to the Board of Elections office on election day, Strickland told the board.

Liberty Commons staff assisted residents in completing the ballots, in some cases serving as witnesses for those ballots, in violation of state election law, Strickland said.

County Attorney Amanda Prince was instructed to discuss the issue with state board lawyers, and returned telling the local board that the state attorneys recommended reconsider the Liberty Commons ballots because “the fault lies with this office” and resulting problems should not penalize the voter.

Attorney Boyd Worley, representing the Jody Greene for Sheriff campaign, argued that the issue had been settled and should not be reopened. Greene, a Republican challenging Democrat Lewis Hatcher for sheriff, appeared in the lead late Friday with.

Worley said reversing the previous decision would set a precedent that “we don’t need to go by the rules.”

Nancy Hill, a Democrat leader, argued for counting the nursing home ballots, saying “every vote should be counted.”

Ultimately the local board agreed to take another look at the disputed Liberty Commons ballots, then voted unanimously to
“stand by the previous decision,” member Mack Ward said. “We are in compliance with the statutes as written.”

There is a process to appeal the denial of those ballots, Ward said.

Look for updates on this story here as events warrant, and the full story in the next Tabor-Loris Tribune in print and online.

With absentee and provisional ballots counted, the Columbus County Board of Elections has discovered two uncounted provisional ballots, failed to find a missing one, but the numbers suggest Jody Greene has won the race for sheriff, and liquor by the drink has passed in Tabor City, both with narrow margins.

Tabor City’s liquor vote, with a 7 vote margin in favor in election night totals, appeared to pick up four votes in the provisional counting.

Board of Elections members said there was much left to do, including counting write-in votes, and said they were not sure the canvas would be complete Friday.

Both the sheriff’s race and the liquor by the drink vote could result in recounts, the deadline coming at 5 p.m. the next business day after the canvas is complete.

Buster Davis’ ballot, cast in provisional status election night in Tabor City, remained missing and was not among those counted Friday.

Buster Davis’ missing ballot halted the additional counting of ballots following a long day at the Columbus County Board of Elections.

Of 150 provisional ballots considered by the board 93 were approved, and were expected to be fed into a ballot counter Thursday night, 57 were denied for reasons ranging from failing to register, registering late, or failing to re-register after being a convicted felon.

Davis cast his ballot in Tabor City on election night, and told Tabor-Loris Tribune he was the was the first to do so at 7:30 p.m., as the polling hours were extended to make-up for a lack of in-town ballots at the precinct on election morning.

State law requires that ballots cast during extended hours be considered as provisional ballots, to be considered by the board of elections before being counted. Every other ballot cast after 7:30 p.m. election night that otherwise was valid was approved by the board Thursday.

Poll records showed that Davis voted, but neither his ballot, nor the envelope it was put in, could be found by elections workers preparing for Thursday’s meeting, elections supervisor Carla Strickland said.

What happened to it?

Elections staff contacted Davis during the meeting Thursday evening. He confirmed that he had voted on election day.

Precinct officials will be summoned to the board meeting at 11 a.m. Friday, the scheduled election canvas, to attempt to explain what happened to Davis’ ballot, board members said Thursday.

What will happen to Davis’ vote was not clear Thursday night, and he appeared frustrated at the prospect.

“As a Marine Corps veteran who served tours in Iraq, you would think my vote would count,” Davis said.

Look for additional coverage hear following Friday’s election canvas meeting, and a full report in the next Tabor-Loris Tribune in print and online.

Don’t expect a decision today on two closely watched votes in Columbus County, with the state Board of Elections to decide the future of some absentee ballots improperly delivered on election day.

Columbus County Board of Elections members approved 80 of 150 provisional ballots before them during a four-hour session Thursday, agreed that at least some races on nine more ballots will be counted, and left decisions on 11 ballots tabled with elections staff to conduct further research.

Local board members denied 50 of the provisional ballots.

Provisional ballots are offered to a voter when there are questions about their qualifications or eligibility to vote.

In recess until 5 p.m. today, the Columbus County Board of Elections is expected to count the approved ballots and make decisions on some tabled ballots before the day ends.

A canvas of the election is scheduled for 11 a.m. Friday. Local elections supervisor Carla Strickland, addressing the board about the outstanding ballots they have not considered, said she did not know when the state board will meet.

Strickland could not immediately say how many of the absentee ballots were to be considered by the state board. They include absentee ballots cast by residents of a nursing home and delivered incorrectly to a voting precinct on election day, instead of to the Columbus County Board of Elections offices in Whiteville.

A call to the State Board of Elections public information officer was not immediately returned Thursday.

With at least 80, and possibly 100 provisional ballots to be counted, and more absentee ballots, a winner for the race for Columbus County Sheriff, and a decision on a liquor by the drink referendum in Tabor City, were still in doubt late Thursday.

Vote totals from election night so the liquor issue passing with just a seven-vote margin, 385 to 378; and in the race for sheriff Republican challenger Jody Greene with a narrow 52-vote lead over incumbent Democrat Lewis Hatcher, 9,353 to 9,301.

Look for more here as events warrant, and a recap in the next Tabor-Loris Tribune in print and online.