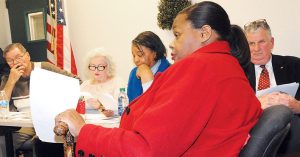 The sole petition challenging Columbus County’s election for sheriff and Tabor City’s liquor by the drink vote has been dismissed by the Columbus County Board of Elections, with formal “findings of fact” to be prepared by county attorney Amanda Prince and presented to the board for approval at their next meeting.

Franklin Thurman, chairman of the Columbus County Democratic Party, said the party “is disappointed head to toe” and will challenge the findings of the local board.

Nancy Hill, whose protest was the only one of four heard by the board, said that she, too, will appeal those findings.

With the decision Republican Jody Greene is set to become Columbus County Sheriff Monday morning. A recount concluded by the board Friday gave Greene a 37 vote victory over incumbent Democrat Lewis Hatcher, an increase of three votes compared to the previously certified vote totals.

Look for the full story in the next Tabor-Loris Tribune in print and online.

A brief recess now underway will be followed by testimony and evidence in the protest brought by Brunswick Mayor Nancy Hill.

Protests were dismissed in two instances on procedural issues, and the board found no probable cause to move forward on the third.

Hill’s protest focuses on problems at South Williams Precinct in Tabor City on election day, when some voters were turned away because ballots for voters living within the town limits were not available for nearly two hours on election morning.

Jody Greene picked up a net three votes in his bid to become Columbus County’s new sheriff in a recount of the Nov. 6 ballots completed after noon Friday.

With nearly 19,000 ballots counted again, the count was 9,388 for Greene, the Republican challenger to 9,351 for incumbent Democrat Lewis Hatcher, a 37 vote margin of victory.

Greene had enjoyed a 34 vote margin of victory in the votes certified previously, with Hatcher asking for a recount under state law that allows the procedure when the margin is within one percent.

Board of Elections members will begin hearing for protests of the election, all four asking for a new vote in the race for sheriff because of problems with the election, two of those also asking to overturn the mixed drink referendum in Tabor City that passed with an 11 vote margin.

Look for updates here as events warrant, and the complete story in the next Tabor-Loris Tribune in print and online.

A full day recounting votes complete, the Columbus County Board of Elections has returned to that task in the process of settling the race for Columbus County Commissioner.

A hearing on four protests of that election, two that include the referendum on liquor by the drink sales in Tabor City, will begin after the recount is complete, board members said after 9 a.m. Friday.

That hearing was scheduled for 9 a.m., but will wait until the recount is complete and certified.

“We must certify the recount first,” board member Mack Ward said.

In the election for sheriff, Republican challenger Jody Greene holds a 34-vote lead over incumbent Democrat Lewis Hatcher in results previously certified by the board. Hatcher asked for the recount, allowed by law when the margin of victory falls within one percent. Greene’s margin is well within that number.

Look for updates on the recount, and the protest hearings as that information becomes available, and the full story in the next Tabor-Loris Tribune in print and online.

Protests challenging the validity of Nov. 6 general election results involving the race for Columbus County Sheriff and liquor by the drink sales in Tabor City were discussed, then tabled during a three-hour meeting of the Columbus County Board of Elections Tuesday.

A recount in the sheriff’s race, requested by Sheriff Lewis Hatcher, was scheduled to begin at 10 a.m. Thursday, and could stretch into Friday as more than 18,000 ballots are fed into ballot counting machines, again.

All four protest hearings will be heard during a special board session set for 9 a.m. Friday because those filing the protests and other related parties were not notified that Tuesday’s “Emergency Meeting” of the board, called last Wednesday, would include a planned decision on those protests.

County Attorney Amanda Prince, after consulting with a state Board of Elections lawyer, recommended the local board provide proper notice of the new hearings, at least 48 hours in advance.

Protests from McKenzie and Hill listed Tabor City’s mixed drink referendum, which passed by 11 votes; and the race for sheriff, won by Republican Jody Greene with a 34-vote lead over incumbent Democrat Lewis Hatcher in vote totals certified last Monday.

Greene is scheduled to be sworn into office Monday.

Look for more on this story in Wednesday’s Tabor-Loris Tribune in print and online, and later updates as warranted here.