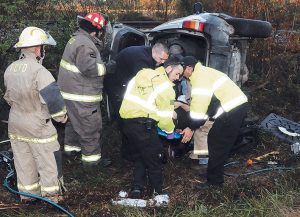 A young man was trapped in his overturned SUV on Emerson Church Road near Ten Mile Road for nearly an hour Friday, most of that time as fire and EMS crews worked to remove him.

Though the man did not appear to have life-threatening injuries, the position of the vehicle on soft ground across a ditch from the two-lane highway complicated the extrication, with crews arriving shortly after 7 a.m.

A sun roof helped rescuers gain access, with the Roseland Fire Department asking for assistance from Tabor City Fire Department with more extrication tools. As the TCFD crew was getting its extrication equipment set up, the man was brought out through the back hatch, and soon in the back of the warmer Tabor City Emergency Services ambulance.

Outside temperatures were in the mid- to upper-30s at the time.