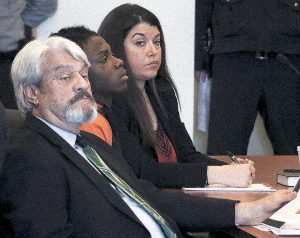 Prosecutors plan to pursue the death penalty against Chauncey Askew for the shooting of Trooper Kevin Conner.

Superior Court Judge Douglas Sasser ruled against defense attorney Richard Miller’s request for an additional continuance of a Rule 24 hearing Friday, The News Reporter in Whiteville reports. After a grand jury indictment, a Rule 24 hearing is held to determine if there are sufficient aggravating factors to allow capital punishment as an option in a murder trial.

Askew and Raheem Davis are charged with the first degree murder of Highway Patrol Trooper Kevin Conner in the Sellerstown community on U.S. 701. The suspects allegedly opened fire on Conner after he attempted to stop them for speeding around midnight Oct. 16.

The truck the men were in was stolen from a Chadbourn business.

Minutes before his appearance in the courtroom, Highway Patrol troopers drifted into the Superior Courtroom singly and in small groups, joining an augmented staff of bailiffs and sheriff’s deputies. Sheriff Jody Greene and Chief Deputy Aaron Herring were among the cadre of officers in the courtroom.

Troopers and representatives of the district attorney’s office escorted Conner’s wife Miranda and a number of family members to the front two benches a short time later. Miranda Conner was originally seated almost directly behind the defendant’s table, but court personnel suggested she move to the other end of the bench.

A short time later, Askew shuffled into the courtroom wearing an orange prison jumpsuit and body armor, escorted by deputies and troopers.

Sasser agreed with District Attorney Jon David’s assertion that Askew’s prior felony history and the circumstances surrounding the October 2017 killing were enough.