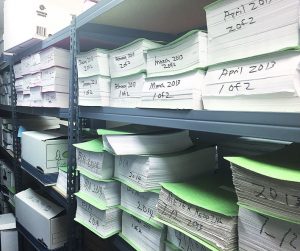 Loris Administrator Damon Kempski’s signature “appears to be” on an invoice and service agreement related to the shredding of more than a ton of City of Loris documents in the fall of 2016, though he says he’s never seen it.

Former City Clerk/Treasurer Bridgett Fowler provided the document this week, and speaking exclusively with Tabor-Loris Tribune discussed the recently completed 2015-2016 audit for the city, delays blamed by the city administration on those missing documents.

“That appears to be my signature on the document but I’ve never seen that document before,” Kempski said of the Shredright Corp. invoice and agreement Tuesday. “None of the other handwriting is mine.

Kempski told council during its February meeting Monday that the audit was complete, with auditors scheduled to present their findings formally at council’s March 4 meeting, council members to receive the document ahead of time.

Still to come are audits for the fiscal years ending June 30, 2017, also past due, and the audit for the most recent fiscal year that ended last summer.

Getting caught up will free state revenues that have been withheld because of the overdue audits, $15,000 per quarter, or $60,000 per year, city officials have said.