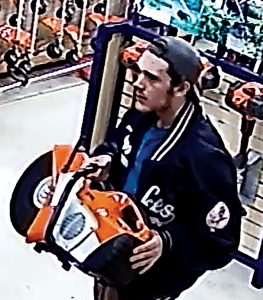 A thief who took a saw from a Williams Township area business this week was caught by store surveillance, leaving Columbus County Sheriff’s Office investigators asking for help to identify the man.

The man walked out of Singletary Small Engines, 9511 James B White Hwy South, Whiteville, just after 5 p.m. Wednesday carrying the Stihl saw store surveillance caught in his hands, sheriff’s spokeswoman Michelle Tatum said Friday. He was last seen leaving the area in a 2004 to 2007 silver four-door Honda Accord.

Anyone who can identify the man is asked to contact Det. Strickland at the sheriff’s office, 910-640-6629 or submit a tip to mtatum@columbusco.org.

Look for more on this story as events warrant or in the next Tabor-Loris Tribune in print or online.