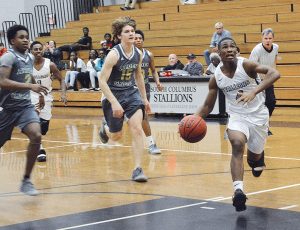 A first-round home-court win in the North Carolina 2A varsity basketball playoffs has South Columbus ready to host First Flight in the next round.

Tip-off for the second round game at South Columbus is 7 p.m. Thursday.

South Columbus claimed a 67-57 win over Ayden-Grifton to open the state championships Tuesday, falling behind early in the contest, turning the game around with a scrappy defense and hot shooting.

Ayden-Grifton had a 17-15 lead at the end of the first quarter, but the Stallion’s defense kicked in the second period and South Columbus went into halftime with a 33-26 lead.

Both teams came out with a smothering defense after intermission, the Stallions ahead by as much as 21 points, with a third quarter 54-33 lead.

Hot shooting from both teams in the final period narrowed the margin to 10, leaving the Stallions ahead.

Second round action Thursday will see two teams with similar records, the Stallions at 20-8, the Nighthawks 19-8 for the season.

South Columbus was 7th seeded in the tournament, First Flight a 10 seed.

First Flight took a 72-46 win over Fairmont at Kill Devil Hills in the first round of tournament play Tuesday night. Fairmont defeated South Columbus last week in the finals of the Three Rivers Conference Tournament.

Look for more on the tournament in the next Tabor-Loris Tribune in print and online.