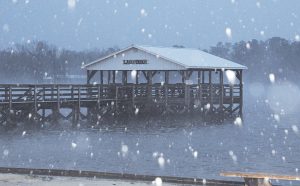 Snow covered some rooftops and grassy areas, but pavement was wet, not slushy as dawn broke over the Tabor-Loris Community (TLC) Tuesday.

Forecasts Monday of winter precipitation moving through quickly, gone by daybreak, proved inaccurate, with some calling for the “wintery mix” to continue until about 10:30 today.

School buses were on the roadways, at least one seen in Tabor City with four-way flashers activated as it moved through a steady snowfall. 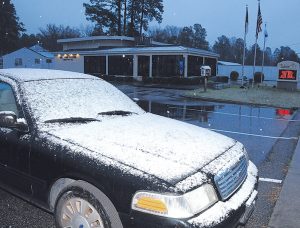 No school cancellation notices were issued for Columbus or Horry counties. Some rural areas, and those north of the TLC, were reporting heavier accumulations, but not on roadways.

Don’t expect the snow to last. Temperatures are forecast to reach the mid-40s today.

Look for developments here, if events warrant, and a wrap-up in tomorrow’s Tabor-Loris Tribune in print and online.