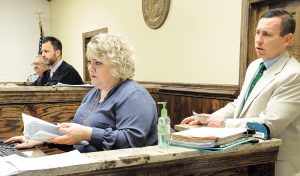 More than 400 cases on the docket for District Court in Tabor City Friday likely set a record for the facility, Clerk of Court Jesse Hill said.

Water damage from recent floods and a faulty water pipe forced extensive renovations inside the courthouse, cancelling sessions in January and February, those cases continued to this session.

Hill said Tabor City town government “did a fantastic job” with the renovations, replacing carpet with flooring, building a new bench for the judge, clerk and witnesses, and painting the facility.