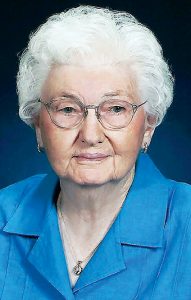 Nell Prince Lupo of Green Sea passed away peacefully on Sunday, March 17, at Lower Cape Fear Hospice Angel House in Whiteville. She was 94.

Mrs. Lupo was born on March 19, 1924 in Loris, to the late Irby Ervin Prince and the late Florence Benton Prince.

Mrs. Lupo retired from Loris Community Hospital after 38 years of dedicated service, was a beloved member of Green Sea Baptist Church for over 68 years, and was an avid gardener who loved being outdoors. She was truly a blessing to all who knew her.

Survivors include her nephew Claude Edward “Eddy” Prince, Jr. and wife Sheila V. Prince of Green Sea, and their son Patrick Prince of Maryland; her sisters, Martha Hardee of Loris, and Betty Tyler of Lake Waccamaw, and many loving nieces, nephews, extended family, caregivers, and friends.