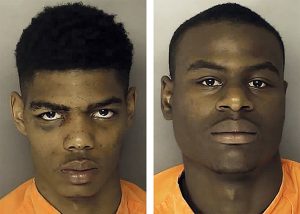 A manslaughter charge has been upgrades to murder in the shooting death of a Loris High School senior last month.

Aaron Miguel Vereen, 18, of Log Cabin Road in Loris has been served with a warrant charging him with murder in the March 25 slaying of Mar’trellyiz Vereen, also 18, Horry County Police Department spokeswoman Mikayla Moskov said Monday.

Two local teens have been charged in connection with Monday’s shooting death of a Loris High School senior at an area cemetery, the Horry County Police Department reports.

Aaron Miguel Vereen, 18, of Log Cabin Road and Tyson Lamont Clifton, 18, of Hwy 746, were arrested Tuesday, both facing charges in the death of Mar’trellyiz Vereen, also 18.

Aaron Vereen was charged with voluntary manslaughter and possession of a weapon during a violent crime. He is not related to Mar’trellyiz Vereen, HCPD spokeswoman Mikayla Moskov said.

Clifton was charged with obstruction of justice.

Both Aaron Vereen and Clifton were jailed at the J. Reuben Long Detention Center near Conway without bond.

“The argument turned into a physical altercation which led to the defendant producing a handgun,” the warrants said. “The defendant then shot the victim several times causing the victim’s death.”

Clifton, questioned by detectives at the HCPD office in Conway on Tuesday, “withheld information regarding a homicide investigation,” a warrant said, “hindering the investigation.”

Confronted by detectives “with the fact that he did in fact know what had taken place,” Clifton eventually provided detectives with information on the killing.