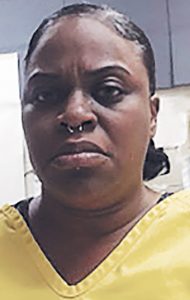 Found with marijuana, cocaine and Suboxone strips inside Tabor Correctional Institution on Saturday, a Raleigh woman says an “unknown” caller told her to do it.

Callie Laverne Graham, 43, of Addison Place, Raleigh, was charged with three felony counts of possession of controlled substances in a prison, the report by Officer Christopher Hilburn said.

Graham was detained by staff at Tabor Correctional Institution, found with cocaine, marijuana and Suboxone stripes, the report said. Graham would not speak to police at the prison, but at the Tabor City Police Department “gave a video and written statement in which she admitted taking the drugs into the prison,” the report said. “Graham said that an unknown to her male called her and told her where to pick up the drugs and money and that she did and said that she packaged it and then reported ‘I did what I had to do.’”

Graham was held at the Columbus County Detention Center under a $15,000 secured bond.

Look for much more area news, including crime reports, in this week’s Tabor-Loris Tribune in print and online.