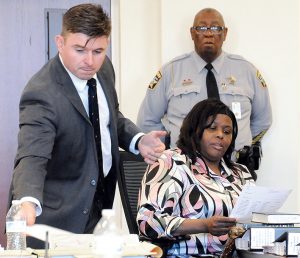 Bantering lawyers, a boisterous witness and testimony that did not seem to clear confusion over last November’s election for Columbus County sheriff were highlights of day one of a Columbus County Board of Elections hearing Wednesday.

That hearing recessed after 6 p.m. and is scheduled to resume at 9 a.m. Thursday in Courtroom C of the Columbus County Courthouse in Whiteville.

Still unsettled is who is the rightful sheriff of Columbus County, Lewis Hatcher who served for five years ending in December, or Jody Greene who was sworn into office on Dec. 3, 2018 but whose election has not yet been certified?

Greene was the apparent victor after a recount last November, his margin of victory set at 37 votes, though protests have centered on election day irregularities, absentee ballot issues, and questions regarding Greene’s residency.

Evidence presented Wednesday was entirely on behalf Hatcher and of Gloria Smith, whose post-election protest was dismissed by the county board last November, and ordered back before the local board during a State Board of Elections hearing last month. Evidence Thursday will be presented on behalf of Greene, before the local board hears arguments from attorneys and makes their decision.

State Board of Elections members gave the county board until Friday to reach their findings of fact and conclusions of law, and to transmit those to the state board. 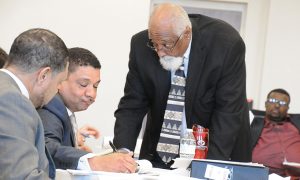 Separate issues were considered by the county board Wednesday, election irregularities including absentee ballots that were not counted, allegations that some polling places opened late, and a provisional ballot in Tabor City that went missing and was never found; and questions regarding the residency of Jody Greene.

There were plenty of objections from attorneys for Hatcher, Greene and Smith on various issues, including lengthy exchanges over where and how election protest notices were served on Greene, and lawyers for Greene challenging an attempt by Hatcher attorney Oscar Blanks to discuss documents they planned to introduce later in the hearing.

Raleigh attorney Michael Crowell, representing the county board and essentially moderating Wednesday’s hearing, echoed what appeared to be frustration by board members over the numerous objections.

“As the board chair has just pointed out, ‘so what,’” Crowell said.

“We just spent 15 minutes arguing over who’s going to show something first,” Blakney said. “That’s totally ridiculous from a layperson’s point of view.”

Calvin Norton of Whiteville, called by Hatcher attorney Blanks, said he supported Greene during the election, but had launched his own investigation into his residency armed with subpoena power because he has filed a federal lawsuit against Green and a host of county officials he alleges allowed Greene to be improperly sworn as sheriff.

Norton offered testimony on an RV trailer Greene says is his residence but that Norton said was bought and registered in South Carolina, property records, and an effort to obtain any records from the North Carolina Department of Public Safety that might show Greene’s previous employer, the North Carolina State Highway Patrol, ever investigated any residency questions.

Greene abruptly stood and walked out of the courtroom as that questioned was asked, without making a comment.

Attorneys for Greene, Boyd Worley and Phillip Isley, repeatedly objected to comments from Norton that went beyond answering questions from Blanks or other attorneys representing Hatcher or Smith.

“There is no need to give revisionist information,” Crowell told Norton. “It is not what you are asked.”

Worley and Isley said Greene and his wife Angela will be called to testify Thursday morning, and perhaps another witness or two.

Look for more on this story as events warrant, and the complete wrap-up in the next Tabor-Loris Tribune in print and online.