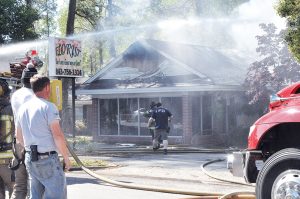 Fire and water damage from an extensive firefighting effort left the building at 4814 Main Street a total loss, Loris Fire Chief Jerry Hardee said. Fire that spread throughout the building may have begun outside in or at a vehicle that was also gutted by the blaze, Hardee said.

Loris Fire was backed up by multiple Horry County Fire Rescue units, with Tabor City Fire Department responding to man the LFD station while its crews were tied up.

It was a tough fire to fight, Hardee said.

“There was a gable roof on top of the original flat top roof, which made it more difficult to put the fire out,” Hardee said. “The gable roof was placed there to help with water leaking.”

Look for much more on this story in tomorrow’s Tabor-Loris Tribune in print and online.