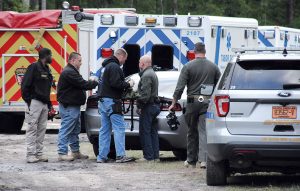 A Tabor City area man and a woman believed to be his kidnapping victim were found dead in his home hours after Columbus County Sheriff’s Office deputies first tried to make contact with him Saturday afternoon, Chief Deputy Aaron Herring said.

Marco Vaught, 36, and a woman were found dead in his Deer Lane home before 8 p.m. Saturday, Herring said. Positive identification of the woman had not been made Saturday evening, but WSPA TV in Spartanburg reported that she was Rebecca Purry, 28, who had been kidnapped in Pickens Wednesday.

Vaught was wanted for murder, accused of shooting Claudette Purry on Wednesday. Claudette Purry, 54, died hours after being shot in a Greenville, South Carolina hospital.

Deputies were called to the Vaught home at the end of Deer Lane, a long, winding dirt road east of Tabor City, Saturday afternoon, Herring said.

“When the deputies arrived, they heard gunshots,” Herring said. “They backed off and called in backup.”

Backup included a SWAT team and hostage negotiator who tried for more than three hours to make contact inside the home, Herring said.

With no response, deputies made entry.

Look for more on this story as events warrant, the full story in the next Tabor-Loris Tribune in print and online.