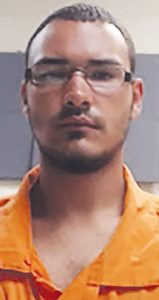 Accused of a rape in Columbus County a Tabor City area man was arrested in Forsyth County Friday and quickly returned to face those charges.

Nobles is accused of raping a 55-year-old woman in her home on James B. White Hwy South, Whiteville, on April 30, sheriff’s spokeswoman Michelle Tatum said.

The victim told deputies that she was raped at gunpoint, tied up, and her vehicle stolen, Tatum said.

Nobles was in possession of a gun when he was arrested in Forsyth County, Tatum said.