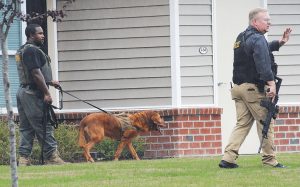 A man wanted on drug charges connected to the arrest of his girlfriend was back at her Tabor Landing apartment Wednesday, trigging a manhunt that included a state Department of Public Safety K9 tracking team.

Rain likely hampered the search, called off after a few hours, Maj. Greg Sibbett of the Tabor City Police Department.

Police were at the apartment of Janicka Rayeann Buchanan, 33, on Friday to serve Brunswick County warrants on Jarmaine Oneal Johnson, 34, charging him as a habitual felon.

A search of the apartment turned up drugs, resulting in Buchanan’s arrest, but Mason was gone before police obtained the warrants, Sibbett said.

Look for updates on this story as events warrant and the full story in the next Tabor-Loris Tribune in print and online.